Anyone can become angry – that is easy. But to be angry with the right person, to the right degree, at the right time, for the right purpose, and in the right way – this is not easy. – Aristotle, The Nicomacbean Ethics 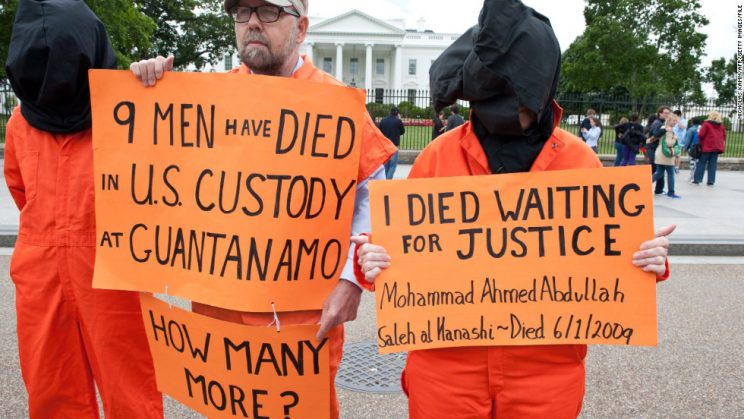 166 inmates currently have the privilege to be in the most expensive prison on Earth – the Guantanamo military camp. Little did they know 15 years back that they’d one day be captivated and force-fed to endure such devastating facet of life with no opportunity to demonstrate their innocence, and definitely no opportunity to leave. 9 died, 3 hanged themselves leaving behind suicide notes in Arabic. The beautiful Cuban landscapes of Guantanamo are painted in blood and the US government is readily answerable for it.

Guantanamo Bay – a medical-ethics free zone – is a rather infamous aftermath of the 911 terrorist attacks. 2002 was the year when the US decided to enter this new age of warfare. With no application of the established laws of war or framework, the US’ Department of Defence readily decided that whoever would be caught in the war on terror post 911 would be put under detention preferably at the Guantanamo Bay, making it easier for the government to argue that these detainees were not entitled to protection under the Geneva Convention and US constitution, since they were placed outside the boundaries of the US jurisdiction system.

Of 911, and things that followed

Four co-ordinated terrorist attacks made in the US on September 11th, 2001 are the flashback story of the Guantanamo excuse. 19 militants said to be associated with the Islamic extremist group Al-Qaeda hijacked four American airliners and carried out suicide attacks against major
targets in The States. These attacks are generally referred to as 9/11, and are statistically said to have resulted in mass destruction and death of over 3,000 people. Two of the four hijacked planes crashed North and South towers of the World Trade Centre. A third plane crashed into Pentagon, Defence Headquarters, Washington D.C., while the fourth crashed near Pennsylvania. This 8:45 a.m. episode led to trigger major initiatives of the US government under the presidency of G.W. Bush, the Guantanamo detention being one of them.

At 9 p.m. the same day, Bush declared on television, “Terrorist attacks can shake the foundations of our biggest buildings, but they cannot touch the foundation of America. These acts shatter steel, but they cannot dent the steel of American resolve.” In a reference to the
eventual U.S. military response he declared, “We will make no distinction between the terrorists who committed these acts and those who harbour them.” As a result, 780 were detained in the Guantanamo prison. Currently the number has fallen down to 166, out of which 86 have been cleared to release out but have stayed back to help drive hunger strike against the detention of the innocent. Defending the abuse these detainees undergo, Bush once said, “Terrorists that once occupied Afghanistan, now occupy Guantanamo Bay”. Only 10 of the entire detained population are undergoing criminal charges. Why the rest of them have been captivated and are being tortured has no answer!

The Geneva Convention, by word, and intervention of the US

The Geneva Convention is the humanitarian touch to war ethics that came into existence after the Second World War in 1949. It comprises of four treaties, and three adjacent protocols that set international standards for humanitarian treatment in times of war, and extensively define
the basic rights of wartime prisoners. When it came to the War on Terror, the US federation misled the Geneva Convention in enormous ways. Detaining the captivated in Guantanamo, instead of the US soil was a clever midway tactic to keep the Constitution and Convention unperturbed. The inside stories of treatment of the captives at the detention camp portray what is far from human, ranging from
all sort of physical, emotional, even sexual and religious harassment.

Accounts of this inhumane treatment tell tales of hooded, goggled, shackled men in orange jumpsuits, all knelt down before fence wires, in the likeness of Muslim prayer position. The stories scream of systematic abuse, while the military personals openly admit that many of
these detainees don’t even belong here in the first place. “You are in a place where there is no law – we are the law”, say the US military intelligence officers at Gitmo.

The US government classifies these detainees as enemy combatants. They yet have no answer to how majority of these detainees have ever been involved in threatening the peace of their nation. Quite a number of these detainees are known to be captivated as minors, having spent years as prisoners at Guantanamo. These prisoners, undergoing interrogation have been put to solitary confinement for periods
exceeding a year, have been deprived of sleep for days, weeks and even months, exposed to extreme temperatures, raped, threatened, beaten, deprived of medical treatment for serious clinical manifestations, and harassed in so many other possible ways.

The overall expense of running the Guantanamo detainment facility, by the end of 2014, mounted up to $5.242 billion, more than the estimated GDP of several countries that very year. Yearly cost estimate for taxpayers of a prisoner in a maximum-security federal prison is nearly seventy-eight thousand dollars. Yet, for the longest possible amount of time, US Presidency made sure that this act was not put down in whichever possible ways. Bush and his loyal Congress counterparts kept on defending the inhumane treatment of the prisoners at the camp, though evidences of the government violating international laws kept coming to light throughout that decade. The US government kept on arguing for years that the detention at Guantanamo was not only beyond the reach of the American civil law but also the
Geneva Convention, or any other international humanitarian act or law.

With the end of Bush’s Presidency, as Obama came to power, he suggested that Bush’s policies of detention and power grab of execution were not very lawful. He also vouched to cut through this detention and bring America’s shame to an end. He said, “It’s time to better protect the American people and our values by bringing swift and sure justice to terrorists through our courts and our Uniform Code of Military Justice.” By signing an executive order as a promissory act to close the Guantanamo Bay within the first year of his presidency, Obama lived up to global expectations. But 5 years down the lane, seeing that Gitmo is still very operational, one must take a moment to comment over where Obama failed to keep his word!

Factually, Obama is said to have received severe backlash over his motive of shutting the prison down, but continued that he still is very committed over getting the prison closed. The detainees’ lawyers however came up with the remark that the President did not live up to his
word. Failing at his rhetoric, Obama gained a reputation of being worse than Bush, among the detainees with wounded sentiments. They prompted that the psychological hurt they underwent during Obama’s presidency was worse than the physical torture inflicted during
Bush’s. At multiple conferences, Obama kept on reiterating his promise to redouble his efforts to close Guantanamo, up to no avail. He suggestively stated that the Congress has interfered with his ability to shut the camp. This has some truth to it.

Guantanamo and the call of Trump

Eight years after Obama had given his word to shut these detention camps down, America elected Trump to Presidency. Now, Trump’s baby words were promises to load up Guantanamo with even more “bad dudes”. It is pretty unbelievable that America recently was on the last year of the presidency of a man who’d sworn to close Guantanamo. So many years yet down the clock, there still are horrifying accounts of inhumane treatment of prisoners at the ‘perfect’ prison. The Prison continuous to haunt the soul of America, or for that say, the rest of the world. The implicit intent of Obama on shutting it, stood long way against Congressmen who were adamant on keeping it open. And then we played our Trump! “I watched President Obama talking about Gitmo, right, Guantánamo Bay, which, by the way, which, by the way, we are keeping open. Which we are keeping open . . . and we’re gonna load it up with some bad dudes, believe me, we’re gonna load it up.”

Trump, early in his court of presidency finalised his orders that suggested that Guantanamo is open for play. Though yet no detainees have been transferred in or out to Guantanamo since he took office, the future of the wartime imprisonment looks indefinite. Trump has openly
supported the Republican-controlled congress and has comically suggested to improve the population stats at Guantanamo, even inclusive of US citizens probable of working for ISIS to be put to trial.

It is natural for a human being to hate torturing or abusing another human being. It is no different in America. But, there of course are people everywhere in the world who’d love to see other people suffering. One implements torture and abuse when in midst of chaos and
confusion. And America certainly became chaotic and confused when September 11, 2001 happened. The list of victims of such chaos is endless. It is not only the detainees, or the military officers, but also just another civil American, wounded in flesh, work, morale or esteem. There’s no doubt about the fact that the US government has been making a tremendous mistake for all these years, and is now ashamed of coming out with the whole truth about the scenario.

The only solution is to forge a huge stop sign at this practice. The Federal government owes its citizens the truth about the situation. America owes these innocent detainees plentiful reparation, if it must. For now Guantanamo is uncertain and is on something like a metaphorical autopilot. There is no doubt that practices at Guantanamo are beyond legal boundaries, humanitarian aspects, or even personally defendable, or acceptable. But America has elected for itself a face that will only lead to doubling its face of shame for indefinite years to come. Detention at Guantanamo has become the face of the gross human rights abuses enacted by the US government in the name of terrorism.

What does a regular American think about the whole story? How clouded is a US citizen’s opinion about the Guantanamo distress? I’m impatient to know. One would like to believe that majority of the American population would demand lawful justice, rather than taking due interest in financing the detention of innocent people in a crimson-painted landscape!

There’s no doubt about the fact that a little population would still think that everybody put into these Cuban prisons is evil, but we don’t speak for opinions, but FACTS!